Automobilia and vintage advertising are both keenly collected fields - as this vintage Esso sign proved! 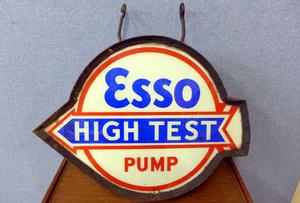 Automobilia and vintage advertising are both keenly collected fields, and rare items can fetch healthy prices - especially when a piece appeals to both markets. Our January 11th Saturday auction saw this vintage Esso sign sell for £1,000.

Formerly called ‘Pratts Motor Spirit, ‘High Test’ fuel came into the ownership of Esso in 1935, and the company immediately set about putting its full marketing might behind a slick new rebrand. The American company understood the power of promotion. The company’s press ads - like the example below - adopted a more sophisticated and compelling turn of phrase, while the bold red, white and blue of its modern stylised logo immediately stood out from the competition on roadsides the world over.

This rare pre-war forecourt sign is a perfect example of this highly effective early Esso advertising. Measuring 65 x 55cm and designed to hang from a beam or roof, rather than the more common pump-mounted versions, the sign and is made from painted glass in a heavy cast metal frame and would originally have been illuminated.

A very desirable object with broad appeal, the fact that one of the sign’s glass panels had been shattered did not deter bidders. Just imagine the price of a perfect example!

Read More about it here