The man who caught the Black Panther

Our auction this Saturday 14th August features a remarkable lot that makes fitting tribute to the bravery of Keith Wood, a bystander who was instrumental in capturing Donald Neilson, better known as the ‘Black Panther’.

The situation reads like a scene from a crime novel. However, the criminal, the danger and the heroes were all real. It was a December Saturday night in 1970s Mansfield, and the queue that had formed outside the fish and chip shop was about to find itself embroiled in one of the most dramatic arrests of the decade.

From seemingly nowhere a police car skidded to a halt. Accompanied by the unmistakable sound of a gunshot, the car’s occupants tumbled onto the tarmac. One, a police officer, gave a frantic shout for help.

In an instant, two local men  rushed forward. It was to be a particularly unfortunate intervention for the man attempting an escape as one of these men, Keith Wood, was a karate enthusiast. In one fluid movement, Keith was able to land an expert blow to the gunman’s neck, felling him and sealing the fate of none other than the murderer Donald Neilson, the infamous ‘Black Panther’. Nielson, a former soldier, had committed a string of violent Post Office robberies and murders, including that of a wealthy heiress.

Keith Wood, quite rightly, had his decisive and bold actions officially recognised with a Queen’s Commendation for Brave Conduct award, as well as being the subject of countless news stories in the national press, television and radio.

pictured at the location of Donald Neilson's arrest

Lot 824 in our auction this Saturday 14th August is an outstanding collection of personal memorabilia that includes Keith’s original award, a certificate signed by James Callaghan, the then Prime Minister, a mounted copper Nottinghamshire Post front page plate, press releases, photos and even items of clothing that Keith wore to his awards ceremony. 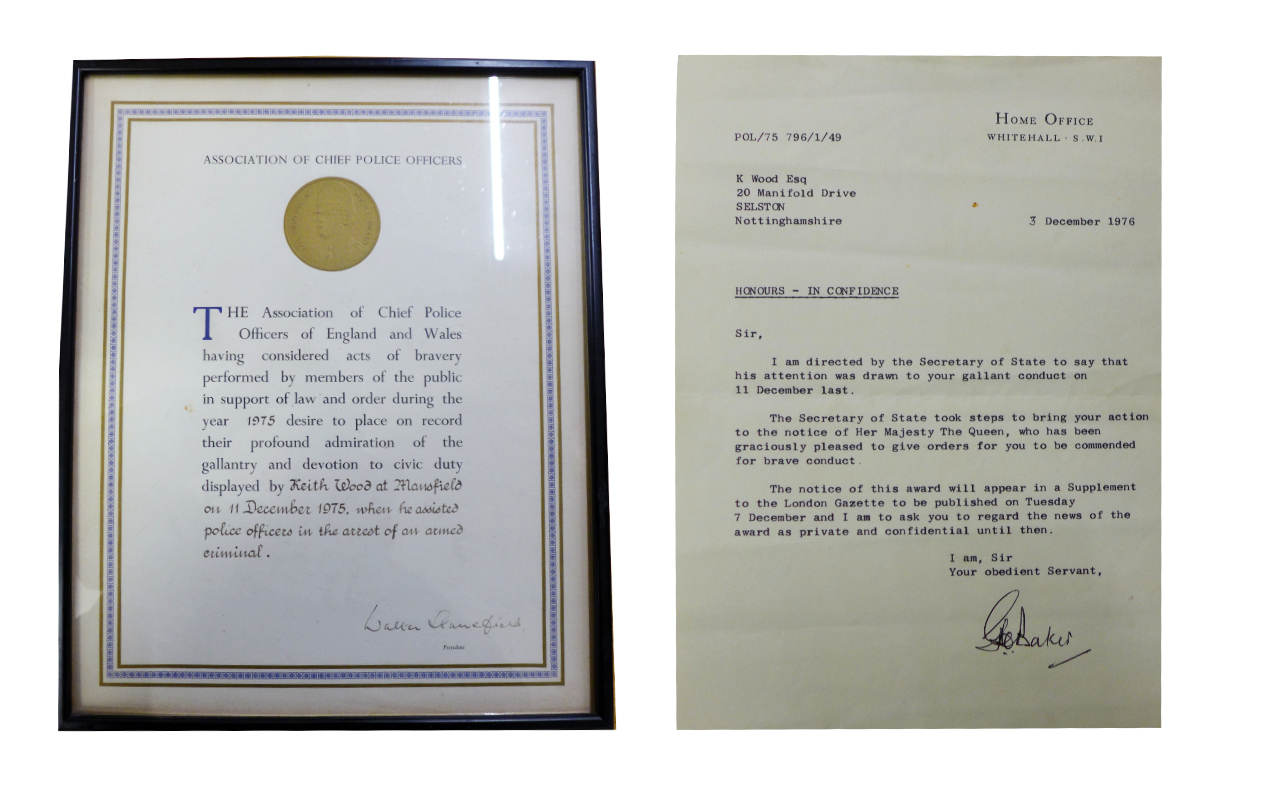 Keith Wood passed away in the 1990s. One of the police officers at the arrest scene had died some years before, but the other was still alive and attended Keith’s funeral, speaking very highly of him. The items are being sold by the family who, having no children of their own, are keen to see Keith’s memorabilia preserved by a collector. It is certainly a rare opportunity to own an artefact of a notorious case, and a reminder that every society must, at its core, rely on the courage and morals of its citizens.

Finally, a family anecdote revealed that after having subdued Neilson and waiting for further police officers to reach the scene, Keith did in fact return to the shop to collect his fish supper. As modest as he was brave, Keith then returned home to eat, and only became known after numerous TV and press appeals were made for him to come forward.