Across the sea of time - the marvellous automaton clock

A fascinating and rare item, this 19th century French mantel clock sold in our Arthur Johnson's Saleroom 1 Auction for £8,000.

If you think of an automaton clock, it's likely to be a Black Forest cuckoo clock. However, from the famous astronomical clock in Prague to the truly incredible full-size silver swan which can be seen in the Josephine and John Bowes Museum at Barnard Castle, Co.Durham, there seemed to be no end to clockmakers' imagination, creativity and skill.

At Arthur Johnson's. we were most fortunate to have the chance to see a very fine example for ourselves in February 2020 when this 19th century French mantel clock sold in our Saleroom 1 Saturday Auction for £8,000.

The clock is attributed to Andre Romain Guilmet, and on valuing the item, our auctioneer described it as the best automaton clock he’d seen. The bronze timepiece takes the form of a mariner holing an oar as he stands at the stern of a small sailing boat. Ingeniously, the figurine forms the clock’s pendulum and gently rocks back and forth. 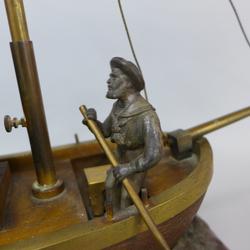 The lot also came with an interesting story. Given as a prize in an athletics event to the seller’s grandfather in the early 1920s, the mantel clock had been passed down through generations of the same family. Though often talked about as an interesting curio, it had never been considered as particularly valuable. We knew the clock was something special, but nevertheless the seller had a pleasant surprise on the day of the sale!

If you've time to spare and you'd like to discover more about automatons, take a look at these links:

Automaton clock from 1625 at the Met, New York